Club Training Program:  (Lightning Lacrosse Elite) This program was created for middle school and high school players who play at a high level and are on travel teams.  We assume you have all the basics mastered.  We’re going to take those existing skills and help you get from good to great by teaching high level concepts.  Our coaches live it and play it every day.  Only sign up for this program if you are a top player for your age group.  Each player will be coached by UVA and Syracuse alums and current players.  We are going to check with our local coaches to ensure our registrants qualify for this group so please only register for this if you are an advanced player!

Development Program:  This is the foundation of our success.  We have strived to impact each player by teaching the proper fundamentals to ensure continued success for each player.  Our development program teaches all the basis skills, covers all game scenarios for all positions (including goalie), and ensures a positive learning environment.  This group will also be taught by UVA  and Syracuse Alums and current players.
Program Director: Steve Holmes (Virginia)
Coach Holmes was an Asst. Coach with the Univ. of Virginia during the ’10 season and last years National Championship season.  He was also a standout player for the Cavaliers, an All-American and captain of the ’08 squad.  Coach Holmes is a current starting long stick for the Denver Outlaws of the MLL and is also a member of the Philadelphia Wings of the NLL.
Program Director: Jovan Miller(Syracuse)
Jovan Miller was a stand out player at Syracuse Univ. having been named a 2X All-American midfielder.  Jovan was also a 2X National Champion with the Orange and established himself as one of the best players in the country.  He is now a member of the Rochester Rattlers of the MLL.  He made an immediate impact with Rochester and we are happy that “Jovi Nation” is coming to South Florida!
Program Director:  Former UVA Asst. Coach and MLL standout Mikey Thompson will also work with the midfielders/attackmen at camp.  Coach Thompson was a standout midfielder at UVA and captain of the 2009 team.  He is now the Asst. Coach at Christopher Newport Univ. in Virginia.  Coach Thompson is a great teacher and will work with midfielders on defensive positioning, shooting on the run, and transition play.
Program Staff:  Our staff will consist of current and former standout players from both UVA and Syracuse.  Rounding out our staff will be the best high school coaches in Florida.  Please check back here often for staff updates.
Pricing:  Overnight – $595 / Extended Day – $495
Shooting/Goalie Clinic: (June 10-11)Lightning Lacrosse is also offering a shooting/goalie one day clinic.  This is a separate program from our main camp.  It includes overnight stay at FAU, dinner on June 10th, and breakfast on June 11th.  Check in for this clinic is 12pm on June 10, and check out is June 11th.  Most participants for our clinic are also participants in our camp.  We offer three 2 hour on field sessions for the clinic (afternoon and night session on the 10th, and a morning session on the 11th.)
Register for the camp and/or clinic by clicking below!
http://www.lightninglax.com

Prime Time Sports Training Lacrosse Presents Doug Shanahan's MVP Lacrosse Camps. Doug Shanahan was voted the 2010 US Lacrossre Head Lacrosse Coach of the Year  Doug Shanahan is the pedigree of lacrosse coaches in Florida, during his playing days at Hofstra (01), Team USA (02,06) and with MLL, Shanahan has built quite a list of accalades. The highest of honors include 1st ever Tewaaraton Winner, World Games MVP, MLL ALL Star, America East Player of the Year, NCAA Player of the Year, and All World just name a few.  TheMISSION of the MVP Lacrosse camp is to develop each individual campers skills to the highest capacity possible all while expanding the overall lacrosse IQ.

Program Director:  TEAM USA PLAYER – GINA OLIVER - Gina Oliver enters her fifth season as the Dukes’ defensive coordinator. Oliver came to Duquesne from Ohio State where she was an assistant coach during the 2006 and 2007 seasons.

Oliver, who was on the U.S. World Cup team that won gold in June 2009, was a stand-out midfielder at Ohio State (2002-2005) where she played under current Dukes head coach Michael Scerbo, when he was an assistant with the Buckeyes. As a player, Oliver was a four-year letterwinner with the Buckeyes and earned All-America honors three times. She was named an Intercollegiate Women’s Lacrosse Coaches Association/U.S. Lacrosse second team All-American in 2003 and was a third team selection in 2004. Oliver was a first-team womenslacrosse.com All-American in 2003 and a third-team selection in 2005. Oliver was a first-team selection Warrior/Inside Lacrosse All-American selection in 2003. She was the American Lacrosse Conference Player of the Year in 2003 as Ohio State won the American Lacrosse Conference Championship and the Rookie of the Year in 2002. Oliver was a four-time, first-team ALC All-Conference selection.
The Pottstown, Pa. native is OSU’s all-time career leader in ground balls (236) and caused turnovers (201) and is second in draw controls (121). She is third in career points with 166 while ranking second in goals (125) and sixth in assists (41).
Staff:  Joining Coach Oliver will be other collegiate coaches as well as the top high school coaches in Atlanta.
Pricing:  Overnight – $465 / Extended Day – $365

July 9 – July 13, 2012 (Day Camp 9am – 2:00pm) In 2004, Millon Lacrosse finally made it to Baltimore, one of the nation’s hottest spots for the game. The overwhelming success of this camp will ensure that Millon Lacrosse is going to be around the Baltimore are for some time to come.

Do you want to be a part of the most comprehensive lacrosse instruction in the Baltimore area? Located in Baltimore County approximately eight miles north of downtown Baltimore, Boys’ Latin School of Maryland occupies a stunning campus easily accessible from both Baltimore and the suburbs surrounding the city. BL lays claim to not only one, but TWO full-size, Sportexe artificial turf fields, both of which will be used by all of the campers. For more information, visit www.boyslatinmd.com or www.millionlacrosse.com

2012 Johns Hopkins Boy's Lacrosse CampsFeaturing instruction from members of the Johns Hopkins University Men's Lacrosse staff and select college players and coaches, the boy's lacrosse camps at Johns Hopkins offer a spot for everyone. From high school players looking to enhance their ability to youngsters just getting started, these camps are designed to teach the game and provide a positive experience for each camper.

There are three sessions of the Blue Jay Lacrosse Camp (overnight camp for boys 12 years of age through their senior year of high school) and one session each of the Blue Jay Day and Blue Jay Evening Camps, which are geared to younger campers. 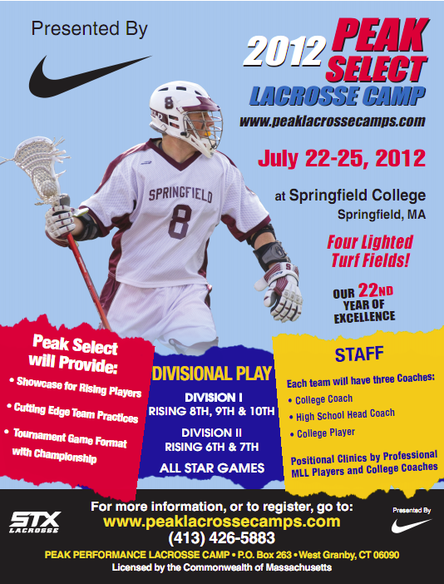 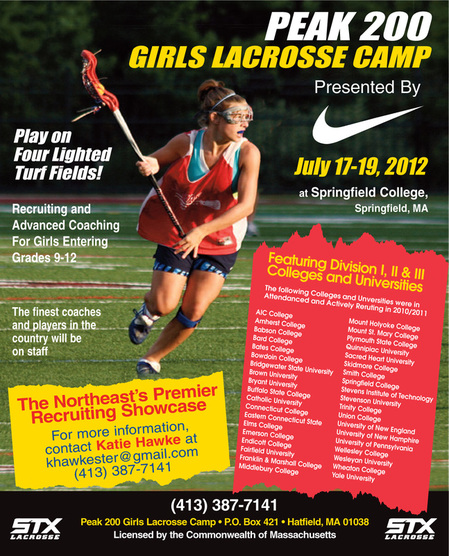 In 2006, Millon International Lacrosse Camps added Stony Brook University to its already impressive stable of camp locations on Long Island. In each of its first three years, the camp was filled up by mid-May. Stony Brook is located on the north shore of Long Island’s Suffolk County and serves as home base to more than 21,000 students. Close by the historic village of Port Jefferson at the geographic midpoint of Long Island, the University campus lies about 60 miles east of Manhattan and 60 miles west of Montauk Point. Stony Brook is easily accessible to campers from all over, via car, air and even the Bridgeport Ferry. All of MILC’s campers attending the Stony Brook location will have full access to brand new, state-of-the-art locker rooms, gymnasium, weight room and lighted field-turf stadium for night instruction and extra help sessions. For more information, check out www.stonybrook.edu www.millonlacrosse.com

As a member of the State University of New York system, Farmingdale will be home to Sessions II and III of the 2010 Millon International Lacrosse camps. The campus occupies 380-acres in the heart of Long Island and is easily accessible off the Long Island Expressway and both major Long Island parkways. Campers will have access to ten manicured regulation-sized fields for drills, instruction and games. If inclement weather should occur, the school’s 94,000 square foot field house will be available for instruction.

For the past five years, all Millon campers stayed in the brand-new, Orchard Hall. It boasts fully air-conditioned, suite style dormitories. Each of the campers’ suites will have its own bathroom. A common room with flat panel, plasma TV is located on each floor for the campers’ viewing in the evenings. For more information, check out www.millonlacrosse.com

The Syracuse Men’s Lacrosse Summer Camps and Tournaments are operated by the Syracuse Men’s Lacrosse Coaching staff. The history of Syracuse lacrosse summer programs started over 25 years ago when the staff began the Syracuse Championship Lacrosse Camp which is still running today. Since the development of our first program we have also started an impressive day camp for up and coming lacrosse players as well as four tournament/clinic programs for high school aged players. Our staff has been committed to creating and developing programs that serve and advance young players. Our goal is to offer a quality experience while having a good time. All of Syracuse Lacrosse Summer Programs are a part of SULAX Inc. and are held at Syracuse University in Syracuse, New York.Info:  http://www.sulacrossecamps.com/

Description:
Cornell Boy's Lacrosse offers a “total” camp covering all aspects of the game. Individual attention is given to each camper.

Cornell’s Big Red Camp covers all aspects of the game, where individual attention is given to each athlete. Includes tactical sessions for offense and defense, sessions teaching game and positional strategies, plus individual stick-work session. Includes extra instructional session for GOALIES

Advanced Lacrosse Camp: boys • ages 13-18 • July 15-17, 2011 • cost (early enrollment): Residents $435, Commuters $319 The Cornell Advanced Camp is a competition-based camp, structured in a team format for serious lacrosse players. There will be two divisions based on age.

Ohio Wesleyan University - June 10 – June 14, 2012 Pack your bags! Millon Lacrosse Camp is heading west. In recent years, Ohio has established a reputation for being one of the fastest growing lacrosse hotbeds nationwide. That is why we chose to bring our brand of teaching there in 2004…and what a camp it has been. So far, all four years we’ve had camp there have been sellouts for us, and 2012 is a lock to do the same…so be sure to register early!

Ohio Wesleyan’s 200-acre campus is perfectly situated 20 minutes north of Columbus. Equipped with numerous recreational amenities, gourmet quality dining halls and spacious, air-conditioned dormitories, Ohio Wesleyan was an easy choice to host our westernmost camp. Ohio Wesleyan is justifiably proud of its athletic facilities, which rank as a whole among the finest anywhere in NCAA Division III. Selby Field, which seats 9,100 is the fourth-largest college owned field in DIII, was the site of the 1988 DIII men’s lacrosse championship. www.owu.edu www.millonlacrosse.com

In its first seven years of camp in Pennsylvania, Millon Lacrosse has been an astounding success. So far, all three years at George School have been filled to capacity. The beautiful picturesque facility and awesome staff will help ensure that this camp will be the best in Eastern PA for years to come.

Located just 15 minutes from Trenton, New Jersey on a gentile hillside in Bucks County, Pennsylvania , George School occupies 241 acres of gorgeous suburban land and is easily reached by car, bus or train. Along with its aesthetically pleasing scenery, George School is home to 12 full sized, alluring athletic fields, seven large dormitories, and an air-conditioned student activities center that has pool tables and arcade games that campers can visit during down time.

When they are not playing lacrosse, campers can take advantage of the indoor basketball/volleyball courts, 8-lane swimming pool, and weight training room, all are which are in a short distance from the dorms. For more info about George School, visit www.georgeschool.org  www.millonlacrosse.com